Pay attention to these points in glasses makeup.I don’t know if the fairies have read the glasses makeup that I shared with you last week~ If you haven’t seen the fairies, you can click here → Still a dull four-eyed girl? Glasses makeup must make you “good-looking”!

This week, the baby of Mei Zhan and Mei TV has prepared the skills of the second part of [Glasses Makeup]—“Eye Makeup Painting”. Please continue to take out your notebooks and take classes seriously! ! !

⎊ Eyewear Makeup – Eye Makeup Highlights ⎊
Which girl doesn’t want to be beautiful, but after wearing frame glasses, the glasses will always look smaller, and the eye makeup will not be the same as expected, so Mei TV is here to help you today. Before eye makeup, you must remember the following points:

So be sure to choose a matte eye shadow, choose a color that is darker than the skin, fill the eye socket on the eyelids, and make the pupils deeper under the contrast~

Goldfish eyes who wear glasses for a long time will also make the eyeballs look less prominent because of the shadow! And matte eye shadow will make the whole makeup look cleaner and tidy, but if you like glitter eye shadow, you can use a small amount, so that it will not be too obtrusive~

Then use a darker color, hit the back third of the eyes, smudge forward naturally, create a natural shadow, feel as if you are bathed in the sun, the shadow is naturally sprinkled on your face, at this moment you She is the fairy with the most beautiful eyes and deepest eyes in the crowd! ! 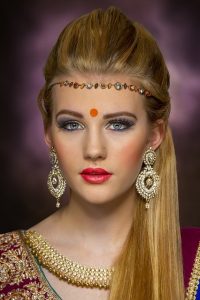 Use the darkest color, extend along the eyelid at the outer corner of the eye, and then hook a small triangle upwards. This step is to make the eye area more layered. The last small triangle will be folded in the double eyelid fold so it will not be too much. abrupt~

Then use a clean smudge brush to let the color transition naturally, so that your eyes are invisible and elongated. But I want to remind everyone that the range of smudges should not be too large, but within the range of the eye sockets, which can also highlight the brow bone and make the eye sockets more profound.

②Pay attention to the painting method of lying silkworm
Because when wearing glasses, the upper eyelid will be blocked by the frame, so the lower eyelid is the key point. The lying silkworm can enlarge the eyes vertically, making the structure of the eye more obvious~ After all, the lying silkworm is a very important part of the eye~

Then use the darker color behind the eyes and gently put it on the shadowed place~ (I suddenly thought of the myth of a straight man about makeup a few days ago, why do you need to paint brightening and shadowing now hhh)

Be careful to knock it! So that the color is too dark to draw a panda~

Use a lighter eye shadow to brighten the eye, contrast with the black pupil, and make the spherical structure of the eye more visible. Glasses will look more neat, there is a spirit~

The brightening is done at the end, because the eyes of people who wear glasses are generally more convex. In the case of no background color, if you directly brighten the color, the eyes will be more convex.

Babies with deep myopia and dead fish eyes can ignore this step!

Knock on the blackboard! Here comes the point!

From the upper eyelid to the end of the eye, the natural transition should be deeper and deeper! As mentioned above, after all, it won’t look awkward!

Straight men will only look stunned, thinking that you are inexplicably pleasing to the eye today~

But there is a misunderstanding here, that is, you have to learn to control how much you send! A simple matte earth color eye shadow can make the eye area clean and advanced, and don’t make it into a heavy makeup!

I don’t know how many girls will be the same as when Mei Zhai was just learning makeup. They always feel that the two eyes are drawn differently. Add a stroke on the left and a stroke on the right, and unknowingly become a love girl or teacher Aoi. What…………

④Eyeliner
Drawing a thin inner eyeliner and lengthening the end of the eye is the key!

Then use a dark eye shadow, and make a natural transition forward at the end of the eye. The outline of the eye will be enlarged and emphasized.

Do not draw too thick eyeliner

The eyeliner is only to emphasize the outline. If you draw too thick eyeliner, it will blur the focus of eye makeup. After all, there is already a frame grabber, so the thickness of the eyeliner is not the point, it is our goal to make the eyes look deep. !

⑤ Mascara
As long as you choose a thick type of mascara, because the long type of mascara will scratch the lens accidentally, which will not only make the makeup look dirty, but also affect the vision~

If you already have long eyelashes, then you can just… just clip it~ I really envy you eyelashes, hum! But if the eyelashes are relatively short, it doesn’t matter what mascara you use~

In this way, you can be very scheming, natural, and advanced to go out!

Well, the upper and lower parts of the glasses makeup are over. Have the myopic fairies learned it~

A must-have guide for beginners: how to choose the first set of cost-effective makeup?

Clueless When It Comes To Shoes? Read This