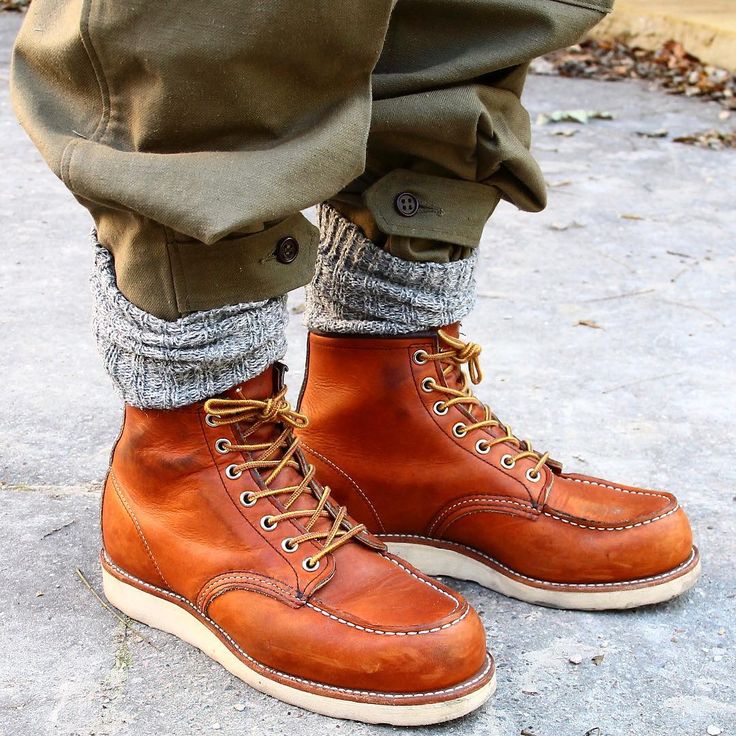 Winter has arrived, and all kinds of versatile and warm boots can be worn. There are various styles of boots for girls. Boots suitable for men are suitable for men. The editor thinks that they need to have two points: good matching and strong durability, so the first choice is tooling boots. Work boots, as the name suggests, are designed from the equipment of workers, such as hunters, lumberjacks, stevedores and diggers. The particularity of these types of work requires certain security equipment to work, and tooling boots are one of the special equipment, so the biggest features of tooling boots are firmness, durability and warmth.

The shape of the tooling boots is divided into two categories: high-top and low-top; the manufacturing is strong, and the Goodyear (GOOD YEAR) welt technology is mostly used, that is, the inner welt and the outer welt of the shoe are double sewn. The upper is firmly integrated with the sole, which can not only withstand any impact and kink, but also form a cavity between the midsole and the outsole of the shoe, and the breathability is also guaranteed. Uppers are commonly used in cowhide, suede and other materials. In recent years, work boots have become one of the popular styles in the fashion industry, and they are often seen on the streets every autumn and winter. Good work boots can be worn for many years. The longer they are worn, the more textured and comfortable they are. It can be said that they are a single product worth investing in.

First of all, the editor would like to say that the most popular RED WING, also known as Red Wing, is a century-old brand that people who pursue retro are familiar with, and has the reputation of “the king of retro boots”. RED WING was born in Minnesota, USA. The product design has both appearance and practicality, and has always been loved by male gods. For most value friends, cost performance is the primary factor in purchasing a single product, so the Red Wing is considered to be the most cost-effective tooling boots, and it is the choice for entry. Classic styles such as 875, 1907 and 9111, etc. The classic Red Wing 875 is easier to care for and has a more versatile shape. Those who like rounded toe caps can consider RED WING’s 9111.

WESCO Boots Jobmaster Men’s Work Boots
Wesco was founded in 1918, exactly 100 years ago, and its history is as tenacious as many American stories. It has experienced prosperity, and has also faced the dilemma of store closures and only machines. It has also appeared in Hollywood movies and runway shows. A pair of WESCO boots has to go through 155 rigorous processes to be completed, using a lot of Stitch Down technology, which is more durable than ordinary Goodyear. . This WESCO Boots Jobmaster men’s boot is also the representative style of WESCO Boots, the most versatile style. Its upper and insole are made of top layer cowhide, as well as its round toe design, which is very soft and comfortable to wear. The tall barrel and the lace-up design are quite fashionable and are perfect for pairing with jeans and motorcycles.

The brand of White’s Boots has a history of more than 100 years, which can be traced back to the period of the American Civil War. Because of its high finish, durability and original Arch-Ease arch support design, it has always been the leader in American work boots. It also produces work boots made of crocodile skin and shark skin, of course, the price is also very beautiful. Today, White’s still insists on hand-made in the United States. The apprenticeship training system that has been passed down from the founder Otto White keeps the quality of white’s boots at a high level and can be worn for 10 years without pressure. These White’s Boots 400VLTT work boots have Xiaobai’s iconic Arch Ease design, which strengthens the arch and naturally arches the heel for a better fit.

Danner was born in Portland, the United States in 1932. It is known as the “Rolls-Royce” in military boots. The supplier of the US Navy SEALs and Delta Force is Danner. The classic work boots are Quarry series, Bull Run series, Gritstone series. These work boots are Danner’s classics, using Danner’s unique Stitchdown hand-stitching process, using the entire cowhide as the upper, without any stitching except the heel. The sole is Vibram outsole, which provides better traction and abrasion resistance. The 6-inch low-top design protects the ankle while allowing flexible movement. With the American flag logo on the ankle, the whole pair of shoes exudes a strong American style.

Wolverine Group is one of the oldest shoe-making companies in the United States. It was founded in 1914, but it has been producing various shoes and boots since 1883. It is now one of the iconic brands in the United States. The first pair of work boots was named the 1883 series, which was also a hit of Wolverine. The design style of the brand was rough and fierce. Here, the editor is more like recommending to everyone: Wolverine 1000Mile men’s work boots, which achieves a balance between design and practicality, more gentleman’s character, and very suitable for commuting wear.

Timberland is a world-renowned outdoor brand, and it has a good reputation in terms of quality and craftsmanship, as evidenced by the nickname “Can’t Kick”. Their 10061 work boots are their classic items and are very popular! Known as the “rhubarb boots” due to the bulky appearance of the yellow leather. Made of high-quality full-grain leather, seamless stitching technology makes it very comfortable, with environmentally friendly recycled rubber soles, strong grip, good non-slip, tough and wear-resistant. Smooth and natural lines and curves outline a simple and atmospheric version, combined with orange-brown tones to create a light and retro sportsman style.

Chippewa 1901 Collection Men’s Work Boots
Chippewa, founded in 1901, originated from the Indian tribes of Wisconsin, USA. During World War II, it provided military boots for the US military to keep out the cold. It can be said that shoemaking has a long history and has now developed into an outdoor boots brand. Many junior high school young people have translated it as “seven puppets”. It is not well-known in China at present, but its quality is comparable to that of RW Red Wing, even more durable, and its reputation is better than that of Timberland, Wolverine and Caterpillar. Chippewa can be said to be the originator of tooling boots. It is extremely particular in terms of workmanship and materials. Among them, the 1901 series is very classic and easy to wear, and it is also widely popular in motorcycle circles. I also have this series of listings for reference: “Feelings of wearing a few pairs of cheap work boots”.

Pay attention to these points in glasses makeup

A must-have guide for beginners: how to choose the first set of cost-effective makeup?

Clueless When It Comes To Shoes? Read This